The planet which will be the owner of first house of any chart plays an important role in a persons life.

Lagna is the base house, from which all the other 11 houses in a horoscope are assessed.

For the horoscope below the owner of First house is Lord of 2nd rashi Venus(Shukr).In this horoscope Venus is placed in 12th house in Aries.(Mesh) rashi ,but Venus is placed at the last house of horoscope (ideal position would be first house).
See the following chart

The ascendant for the above chart is Venus (Lord of 2nd rashi).
Each Rashi has a planet assigned to it as per following matrix (you don’t need to remember it just for reference)

Now depending upon who is your ascendant remaining lordships are calculated.We will go with First chart

HHere the ascendant is Scorpio whose ruler is Mars.Mars itself is placed in 10th house in the above chart.

Now Each of the 12 houses for a horoscope  has lord of that house (this is different from Rashi lord).

If Lagna (Ascendant is Gemini then)

The Tenth house represents your profession, business, authority and power and honours and achievements.

The Twelfth house represents losses, waste, expenses, foreign countries, imprisonment, death, sadhana and Moksha or final liberation. Each of the 9 different planets, while placed in the 12 different houses, produce different, and at times totally opposite results. Again each of them produce some good results and some bad results.

The lordship based on ascendant is fixed and will be different for different ascendants.

For the Scorpio ascendant the lord of 2nd house,3rd house and so on will be different from the lordships of Gemini Ascendants.Likewise you will have 12 ascendants and for each of these the lordship of different houses will be owned by different planet,but the good thing is that it is easily possible to remember by a matrix diagram.Till now be clear upto this much part of horoscopes.

If you have followed my previous  lesson properly then have a look at this link
https://docs.google.com/spreadsheet/ccc?key=0AgGob_Jf-iwPdEU5RVNUSmpSRnJmNVV1SUdJUXh2clE
the matrix I have created, it shows for which Ascendant owner of First house is which planet,second house owner is
which planet and so on.
The first row horizontally marks all the Ascendants (i.e. the rashi in first house of chart)
and vertically you see First house,second house,third house and so on…..

The purpose of creating these tutorials is that one should be able to software generated horoscopes which are otherwise difficult to understand unless you get some guidance from some one.Now from here after you are on your own I have just explained the minimum little basics which will help you in your research on astrology.

A horoscope can be of 2 styles.North Indian and South Indian. 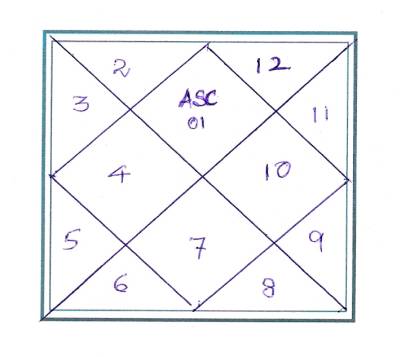 For the purpose of our tutorials we will use North Indian horoscopes. ये  जो  ऊपर  आप  देख  रहे  हो  this is a North Indian style horoscope. All horoscope have 12 houses. Each house represents an area of life.Counting is done anticlockwise.Numbers above tell you First house second house third house and so on .

The number above where 1 is writen is called the lagna sthan or ascendant.House  with number 7 is wifes house,house of business  and similarly each house which has the numbers represents an area of life.What is the functioning of these houses I will explain later.

In above diagram you can see location of first house ,second house,third house and so on.   These numbers have one more purpose ,since this is a tutorial so I could place them systematically but in real horoscopes you will see these numbers differently placed than these positions.

When you will see any real horoscope then these numbers in  represent 12 rashi’s of solar system.(Which is different from the 12 houses.) in above image it shows you which is the first house which is the second house,which is the third house and so on …..check the image below

in this image you see the number 1 is in sixth house , starting from a different position than the first diagram.The numbers here onwards will represent 12 rashis.

Similarly number associated with Jupiter is 2 and Jupiter itself is in 7th house it means,

बृहस्पति  वृष  राशि  में  है  और  सातवे  घर  में  है ,  I leave the finding rest of the planets are in which rashi and house  as an exercise to you.If you can understand this much we will be able to proceed easily.For simplicity of exercise the image above is again here (moon is in 12th house and tula rashi)

Solution is below try once before reading the solution:

Moon is in 12th house tula rashi (the number 7 is tula rashi).

If you have any confusion regarding how I arrived at the houses of planets refer to diagram one drawn with pencil and tally this solution with that.